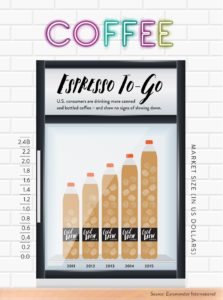 Most millennials were raised with a smartphone in one hand and a branded coffee in the other.

They grew up alongside the rise of Starbucks and Dunkin’ Donuts, and by the time they earned discretionary income, they were spending it on caffeine to go.

The flavored latte-push from their favorite brands may have just primed millennials to crave cold coffee as much as hot.

In fact, according to Mintel, 66 percent of U.S. millennials drink iced coffee compared to 34 percent of Gen X. 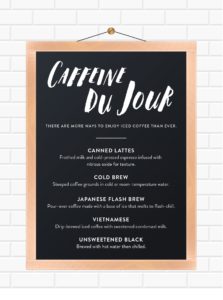 It’s a trend that has percolated into retail store, too.

The ready-to-drink coffee market has been growing by double digits in the U.S. annually since 2011. Euromonitor International expects the market to jump from $2.3 billion in 2015 to reach nearly $3.6 billion by 2020.

As the trend has grown, so have the options available to quench consumer thirsts.