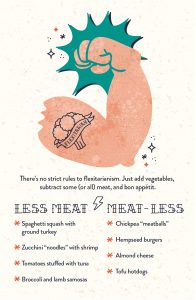 All things in moderation.

It’s a simple concept, but for Americans raised on triple-decker burgers, it’s easier said than done.

That is, until now. As Americans become more health- and eco-conscious, they’ve begun to look toward flexitarianism – a diet high in plant-based foods with the occasional addition of animal protein.

In fact, vegetarian and vegan sales growth increased by 22.9 percent in 2016, and is projected to triple that growth by 2018, according to an FDA report.

Interest has been fueled by high-profile flexitarians – such as Paul McCartney, Emma Thompson and Jamie Oliver – alongside growing concern about meat’s effect on both the environment and our bodies.

But how is this growth playing out in real-life shopping carts? It’s visible in both minimally processed foods and plant-based meat alternatives.

13%
The percentage of consumers who occasionally like to have a “meat-free” meal, such as Meatless Mondays.